Distinction Achieved through Coaching in Mexico 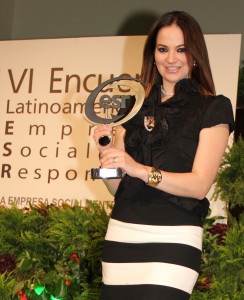 AES TEG Operations, a Mexican energy company, which is part of the multinational AES Corporation received the Distinction as Socially Responsible Business in April 2013. This Latin American distinction as “Empresa Socialmente Responsable (ESR)“, is awarded annually to companies that have reported outstanding practices in the four dimensions, ethics, community relations, environmental management, and employee relations.

For three months, staff of CRME had accompanied Mariné Rodríguez Azuara, leader of administration and public relations at AES TEG Operations and her team, through the process of achieving the distinction. In weekly web-meetings, actual challenges were jointly discussed and solved. CRME evaluated existing company practices, proposed lines of action, and drafted corporate responsibility policies to be included into the integrated management system of the company. Particular outputs of the collaboration was the establishment of a CSR manual, a code of ethics for the plant, and a CSR policy for the area of human resources. Those new instruments complement AES TEG Operation´s well-established system for the management of social, environmental, and ethical aspects, making the company a leader in the operational implementation of responsible management practices. An important factor enabeling the quick implementation was the ongoing support of the company leadership, namely of the business leader Jaime F. Marin Zulueta and of the director of AES Mexico, Luis Knaak.

The work with AES TEG Operations is part of the the Center for Responsible Management Education´s “Executive Coaching Program”, through which CRME topic experts support company leaders in their responsible management tasks.